When planted cropland is flooded by excessive spring rains, some degree of damage to the crop is usually inevitable. The extent of the damage depends on the specific crop, its growth stage, the duration of flooding, and temperatures during flooding. Damage occurs because flooded soils are quickly depleted of oxygen, and most crops require oxygen for normal metabolism, growth and development. Flooding frequently results in higher levels of plant diseases that reduce stands and yields. Finally, flooding usually causes soil nitrogen (N) losses, which can severely limit yields if N is not replaced.

Research in flooded soils has shown that the oxygen concentration approaches zero after 24 hours (however, moderate water movement allows some oxygen to get to the plants, and damage is not as severe.)

Without oxygen,  the plant cannot perform critical life-sustaining functions such as respiration, water uptake, root growth, etc. Water-logging also leads to accumulations of compounds like CO2, which are toxic to plants in high concentrations.

Type of Crop and Duration of Flooding

Most crops grown in the U.S. are intolerant of flooding (rice being the obvious exception). But differences exist between crops in how they respond to flooding. Very susceptible crops include potatoes and dry beans, which may succumb after only one day under water (Glogoza, 2005). Small grains such as wheat often withstand at least one day of flooding or two days of completely saturated soils (Peel, 2000). The major crops grown in the Midwest, corn and soybeans, fare somewhat better, often surviving two to four days of flooding without requiring replant. Soybeans are thought to be more tolerant of temporary flooding than corn and many other crops (Berglund, 2005; Iowa State Extension, 1998; Stanley, 1980.)

Growth stage is a critical factor in survivability due to flooding. Technically, the larger a plant, the more oxygen it requires to stay alive. Practically, however, smaller plants are more likely to become submerged and to remain submerged for longer periods. As a rule, smaller crops in the earliest growth stages are more at risk and are usually more damaged by flooding, ponding and saturated soils.

If temperatures are abnormally warm during the flooding period, the crop survival period may be reduced by 50% or more. Conversely, if temperatures are cool, the survival of the submerged crop increases because its metabolic processes are slowed down. Cloudy conditions decrease solar radiation and keep soils and floodwaters cooler. However, cold, wet weather favors disease development.

Cool, wet soils are most conducive to disease development. These conditions are not only optimal for some soil pathogens, but also delay emergence and plant development. These delays keep seedlings from out-growing damage by soil-borne diseases that attack seeds and seedlings. Seed treatments can help, but are generally limited to about two weeks of protection. If cool, wet conditions persist longer than two to three weeks, crop stands are at risk.

In addition to seedling diseases like Pythium, other diseases may also infect the plant during flooding, but their symptoms may not be evident until much later.

On the opposite extreme are hot and windy conditions following flooding. Rapid soil drying under these conditions can cause crusting that restricts plant growth. Continued drying or "baking" of soils is especially stressful if prolonged soil saturation has resulted in root die-back or severely limited root system expansion.

Growers should carefully assess crop damage and check with their agronomist and crop insurance agent before tearing up the existing stand and replanting. Crops that look yellow and weak can often recover, especially with ideal weather conditions. If plant meristems remain firm and healthy, the chance of survival is high - if meristematic tissues are soft and discolored, recovery is not likely . New growth may require several days after water drains from the field, so patience is often required to make the best decision.

Replanting should be an economic rather than an emotional decision. First, accurately determine your stand loss throughout the field or field area. Next, calculate the yield potential of the existing stand (adjust down for lack of uniformity), and compare that to the yield potential of a later-planted crop. Subtract all replant costs (tillage, planting, seed, re-application of pesticides, etc.) from the value of the replanted crop. Also determine if herbicides used on the prior planting are safe for the replanted crop.

If you decide to replant, allow soils to dry adequately first. Most crops planted wet present problems when soils dry. If stands are worth keeping, cultivation is often helpful to open and aerate soils and encourage root growth. Again, be certain that soils are dry enough for this operation. Working soils wet results in compaction that may restrict root growth throughout the season. 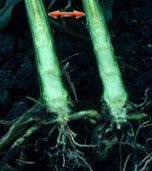 When the growing point of corn is just at or below the soil surface (prior to the V5-V6 growth stage), corn can only survive two to four days of totally saturated soil conditions (Thomison, 1995). Cool temperatures prolong survival, whereas very warm temperatures (e.g., 75 to 80F) may shorten the survival period to only 24 hours. Larger corn can withstand saturated soils and shallow ponding, but not extended submersion of the growing point.

This research indicates that an additional nitrogen application may be beneficial in fields that show signs of yellowing or uneven corn growth. When corn plants are still six to twelve inches tall, a late nitrate test can determine if more nitrogen is needed. A cultivation may also be helpful to break up surface compaction and allow oxygen to reach the roots.

To confirm plant survival, experts recommend checking the color of the corn growing point. In corn plants with 6 leaf collars visible (V6), the growing point will be in the crown of the corn seedling, just above the soil surface. In larger corn, look progressively higher in the stalk. Split the stalk lengthwise to reveal the structure shown in Figure 1 at left. A healthy growing point should be white and cream colored, while darkened, softened tissue usually indicates that plant death is imminent. Monitor the field for new leaf growth 3 to 5 days after water drains from the field.

When soybean fields become flooded, oxygen available for respiration is limited. Flooding also has a negative impact on symbiotic nitrogen fixation (which requires oxygen) and mycorrhizal colonization of soybean roots (Murillo-Williams and Pedersen, 2004). In addition, waterlogging leads to accumulations of compounds that are toxic to plants when in high concentrations. The extent of crop injury that results is usually proportionate to the length of the flooding period.

Soybeans easily survive 48 hours underwater, and have even been known to survive submersion for a week under ideal conditions during and after flooding. Four days or more of flooding stresses the crop, delays the plants' growth, and causes the plants to be shorter with fewer nodes. Flooding for six days may depress yields significantly, and longer periods under water may destroy the entire stand (Naeve, 2004).

Flooding usually increases soil-borne diseases. Soybeans are always at risk to soil-borne pathogens, but with warm temperatures and favorable seedbed conditions, can often outpace disease infections. However, cool, wet conditions during flooding favor disease development while slowing soybean growth. If growth is stalled for two to three weeks or more, diseases can become established and weaken or destroy the seedlings. Free water availability is especially conducive to infection by the "water molds", Pythium and Phytophthora, which release flagellated spores (zoospores) that move through water to infect soybean roots. Flooding and soil-borne pathogens will have a greater impact on poor-quality seed than on high-quality, disease-free seed that is not mechanically damaged.

It is usually best to wait several days after damage is visible before making a replant decision. Injury can look very serious at first, but recovery may still be possible. Take accurate, replicated stand counts that represent the entire field or field area being considered for replant. Based on the plant population, uniformity and condition of the remaining stand, estimate its final yield potential. Compare this to the value of a later-planted crop minus the replant costs. Remember that soybeans can branch significantly to compensate for uniformly reduced stands, but non-uniform stand losses can significantly reduce overall yield potential of the field. Accurate replant decisions require painstaking examination of fields and thorough analysis of potential yields and costs, but the economic benefits are worth the effort.

If the decision is made to replant, it is important to select a variety of appropriate maturity. If the replant date is still within the optimum planting date range for the area, the same variety or maturity may sometimes be used. This is because soybeans flower in response to day length, which helps compensate for later planting. However, when flooding occurs in late spring, or extended wet conditions delay field drying and replant operations, the replant date may be four weeks or more after initial planting. In these cases, agronomists usually suggest a variety at least 0.5 RM earlier than the original variety. See your local Pioneer sales professional to help make replant decisions or to select appropriate replant varieties. Also, remember that when a decision is made to keep a reduced stand, weed competition will be greater due to less shading by the crop, so make weed control a priority on those fields.

Late Flooding of Soybean Fields
Some environments are at risk of high rainfall amounts and flooded or waterlogged soils in summer as well as in spring. Many research studies have been conducted to determine the effect on seed yield when soybeans are exposed to extended periods of waterlogged soils at various stages of crop development. These studies have generally demonstrated that soybeans are more susceptible to flooded soils at reproductive vs. vegetative stages of development.

Researchers noted that flooding during critical reproductive stages reduced yield primarily by reducing crop growth rate. This is similar to how other stresses such as crowding, reduced light and partial defoliation impact the crop and reduce yield (Linkemer, et al., 1998). Yield components affected depended on the growth stage when flooding occurred (and varied by research study), and included pod number, seed size and branch number.

TM ® Trademarks of Corteva Agriscience and its affiliated companies. © 2022 Corteva.