Timing of corn harvest is a critical crop management decision for growers. Early harvest can reduce field losses, but increases drying costs and may reduce grain quality and storability if kernels are damaged during combining and handling. Harvesting later reduces drying costs, but may result in excess deterioration of the crop that may decrease harvestable yield and quality. Thus, there is a right time to harvest each field, but competing demands and weather play an important role in achieving the goal of harvest on a specific date. Nevertheless, growers taking a systematic approach to monitoring their fields during drydown and evaluating loss potential can make the best possible decision in prioritizing their fields for harvest.

A review of the corn development process during the grain fill period is a helpful tool in monitoring crop progress as maturity approaches. 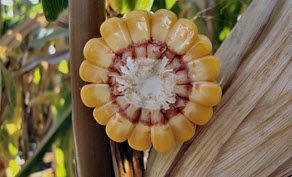 Table 1. Approximate time after silking to beginning of each reproductive growth stage. 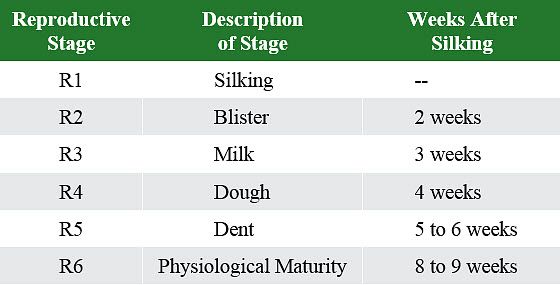 As kernels develop, they progressively gain in “dry weight” as starch accumulates and displaces moisture in the kernel. Beginning at the “dent” stage (R5), a line of demarcation is visible between the hard, structural starch deposited in the crown of the kernel, and the milky content of the rest of the kernel (toward the tip). This border is known as the “milk line” (Figure 1 and Table 2).

Figure 1. Progression of milk line in corn kernels from R5, or early dent (left) to R6, or physiological maturity (right).

Physiological maturity is defined as the point at which dry matter accumulation ceases in the grain. This point is visually indicated by the formation of a black “abscission” layer between the corn kernel and the cob (Figure 2). This abscission layer halts further nutrient transport from the plant into the grain, and so represents the point of maximum dry matter accumulation (i.e., yield) in the grain. 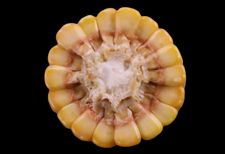 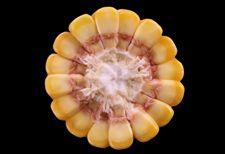 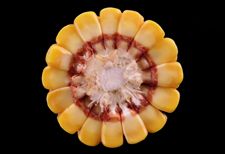 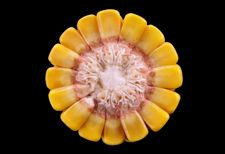 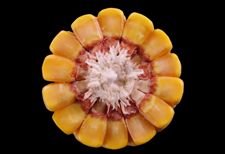 The period from black layer to harvest is defined as the “drydown” period. Kernel moisture loss during the drydown period is entirely due to evaporative moisture loss affected by air temperature, relative humidity and wind. When corn reaches maturity early in the season, field drydown is faster due to warmer air temperatures. For example, according to Ohio State University Extension, corn drying rates as high as 1% per day in September will usually drop to ½ to ¾% per day by early to mid-October, ¼ to ½% per day by late October to early November, and only ¼% per day or less by mid-November (Thomison, 2011).

Grain moisture at harvest affects the time and cost required to dry the grain to acceptable storage moisture levels, as well as grain quality. Wet grain can incur damage during combining, handling and drying. If grain quality is significantly reduced during harvest and drying, allowable storage time is also reduced, dockage may result, and losses of fines and broken kernels can trim bushels of saleable grain. Consequently, choosing the optimum moisture for corn harvest is a critical management decision.

A “rural legend” has persisted in some circles over the decades that corn left to dry in the field after black layer is susceptible to so-called “mystery” or “phantom” yield loss. The reason for the “mystery” label is because the phenomenon is not ascribed to the most common yield-robbing culprits: dropped ears, lodged stalks, insect feeding, or ear rots. Rather, “kernel respiration” is hypothesized to be the primary cause for the supposed dry matter losses.

The narrative first gained credibility following testimonials in farm publications and a university study in the early 1990s (Nielsen, et al, 1996). Following this, other researchers began to report data from previous studies that had measured grain weight as corn drying progressed. Additional studies were planned and conducted as well, with the express objective of documenting kernel weight changes during field or lab drying. Results of these studies are summarized below.

Figure 3.Corn kernel dry matter weights over the post physiological maturity dry down period (Sept. and Oct.) for 2 planting dates and 2 Iowa locations in 2016 and 2017.

Therefore, it appears that yield losses observed in on-farm studies with late compared to early harvest are due to other field loss factors. These factors may not be readily noticeable, but 1 bu/acre is lost with only 2 corn kernels per square foot and these losses can add-up quickly when corn is less than 20% grain moisture (Nafziger, 2018). Combine adjustments to minimize these losses are reviewed in the companion Crop Insights on Measuring and Reducing Corn Field Losses (Butzen, 2018).

Prior research studies were examined to determine if there was evidence of corn kernel respiration rates high enough to explain large yield losses in the field during drydown. A study conducted at Iowa State University showed that when kernel moisture dropped below 30%, the respiration rate slowed dramatically and was only a fraction of the rate measured at the dent stage (Knittle, and Burris, 1976).

In another study conducted by ag engineers at the USDA, shelled corn samples were evaluated for dry matter losses in storage at six temperatures (Saul and Steele, 1966). Samples were at 28% moisture at the beginning of the storage period. Researchers measured the amount of carbon dioxide given off by the samples over time, and converted this number to dry matter loss (DML). Results are shown in the following table:

*These results represent the undamaged control sample in the study.

Average temperatures in the Midwest U.S. are 55 to 65 degrees F in the last half of September, and 50 to 60 degrees F in the first half of October. At these temperatures in the storage study, 1% dry matter loss would not occur for 25 to 50 days. This level of dry matter loss due to kernel respiration does not warrant early harvest and substantially higher drying costs for wet corn.

Many different stresses to the corn plant can lower stalk quality, with the result that stalk problems occur in some fields each year. Drought stress, reduced sunlight, insect and disease pressure and hail damage are stresses that can result in poor stalk quality. Even high yields are a stress on the plant that may lead to stalk problems. Many additional factors, including cropping history, soil fertility issues, hybrid genetics, and microenvironment effects can heighten the problem in particular fields.

Growers are encouraged to monitor their fields as harvest approaches to identify stalk quality problems and prepare to harvest before field losses occur. Scouting fields approximately 2 to 3 weeks prior to the expected harvest date can identify fields with weak stalks predisposed to lodging. Fields with high-lodging potential should be slated for early harvest. Weak stalks can be detected by pinching the stalk at the first or second elongated internode above the ground. If the stalk collapses, advanced stages of stalk rot are indicated. Another technique is to push the plant sideways about 8 to 12 inches at ear level. If the stalk crimps near the base or fails to return to the vertical position, stalk rot is indicated. Check 20 plants in 5 areas of the field. If more than 10% to 15% of the stalks are rotted, that field should be considered for early harvest.

Maintaining grain quality through harvest and storage is a critical goal to optimize profitability. Harvest timing is the primary factor under control of the grower to optimize grain quality. Harvesting grain at too high of moisture content can result in severe kernel damage during threshing and drying. Conversely, allowing corn in the field too long can lead to reduced yield and quality if stalk or ear rot diseases or insect feeding damage are increasing.

Ear rots are a particular concern if weather conditions turn wet in the fall. If ears are in contact with the ground under these conditions, ear rots may develop quickly. Growers should scout fields regularly during the drydown period to inspect ears and for possible disease development. Strip back the husks on 5 plants in 5 areas of the field to check for insect feeding or ear rots. If these problems are severe, consider harvesting early and drying grain to below 18% moisture to stop progression of both insects and diseases and maintain the best possible grain quality.

Most growers have experienced the need to harvest corn at high moistures when late planting or cool temperatures have delayed crop development, and are well aware of the devastating effects on grain quality. For this reason, grain quality experts would like to see corn field dry below 20% moisture before harvesting. But if grain quality is deteriorating, beginning harvest at about 25% moisture may be necessary, especially if there are many at-risk fields to follow. The key to which of these suggestions is appropriate for your fields is to closely monitor both moisture and crop condition beginning at physiological maturity.

Removing 1 point of moisture from a bushel of corn requires about 0.02 gallons of propane. At the cost of $1.50/gal propane, the cost would be 3 cents/bushel. Thus, the additional drying cost incurred by harvesting at 25% moisture instead of field drying to 20% would be 15 cents per bushel (this does not account for any costs attributable to the extra time involved in drying). At $3.50/bu of corn, 4.3% of yield ($0.15/$3.50) would have to be saved to pay for the cost of removing an additional 5 points of moisture in drying. Table 3 shows the bu/acre of corn needed to pay for the additional drying costs of early harvesting at various yield levels. 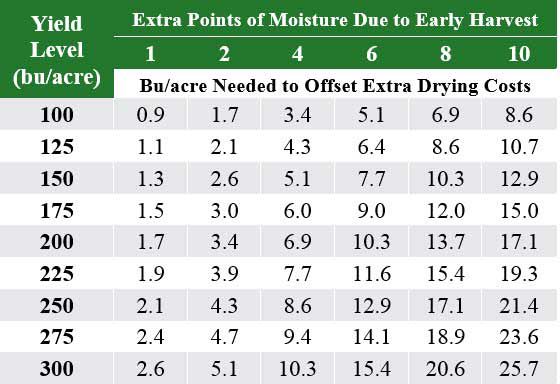 For more than 5 decades, researchers have conducted studies that address the harvest timing decision. These studies have usually shown that yields are reduced with delayed harvest due to progressive deterioration of the crop caused by weather factors. As growers might expect, studies often showed differences between years, locations and hybrids that were related to specific weather conditions occurring between the harvest dates.

Many previous studies indicated that stalk lodging was a major factor contributing to yield losses with delayed harvest. An Ohio State study (Thomison, et al, 2011) tested 4 hybrids differing in maturity and stalk lodging ratings at 4 plant densities in 3 locations over 3 years. Predictably, the study showed that decreases in grain yield and increases in stalk rot and lodging associated with harvest delays were influenced by plant population and hybrid characteristics. Stalk rot and lodging increased at the higher plant populations, and this effect was magnified by late harvesting.

Figure 4. 18 locations evaluated in Wisconsin, Minnesota and South Dakota for effect of harvest timing on corn yield and moisture, 2013.

A portion of each trial field was harvested “early” with a target moisture around 25 percent. The remaining portion of the field was harvested a week or more later with final harvest targeted moisture less than 20 percent. Yield was measured using a weigh wagon to eliminate possible variation due to yield monitor calibration or grain sensitivity. Results are shown in Figure 5. 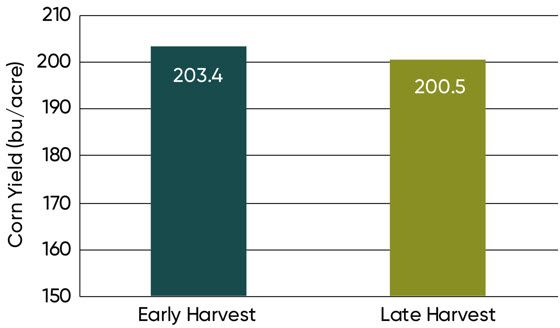 As Figure 5 indicates, early harvest yields averaged 2.9 bu/acre higher than late harvest yields. No obvious agronomic issues were noted between early and late harvested areas. Moistures averaged 25.2 % for the early harvest and 22.1% for the late harvest. At 3 cents per point of moisture removed per bu., additional drying costs would be about $18/acre. At a grain price of $3.50/bu., 2.9 additional bushels per acre (~$10 in value) are not sufficient to pay the additional drying cost.

Proper combine settings are also critical to reduce harvesting losses and increase harvested grain and profits. Combine settings must match crop conditions, which change from field to field and even from day to day. Continual monitoring of ears and kernels lost while harvesting is required to make necessary adjustments to the combine (Butzen, 2018).

The foregoing is provided for informational use only. Please contact your Pioneer sales professional for information and suggestions specific to your operation. Product performance is variable and depends on many factors such as moisture and heat stress, soil type, management practices and environmental stress as well as disease and pest pressures. Individual results may vary.

PIONEER ® brand products are provided subject to the terms and conditions of purchase which are part of the labeling and purchase documents.

TM ® Trademarks of Corteva Agriscience and its affiliated companies. © 2022 Corteva.